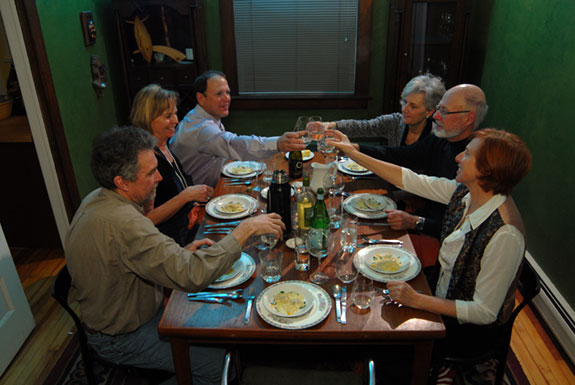 Everyone makes a big effort to end the year.

New Year’s Eve started with a prosecco. The amuse bouche was ready – Castelvetrano olives with Terra chips. And the champagne was sitting with a thermometer reading 50°F on the back porch. The oysters would need opening. The ravioli needed making, but Martha had done a trial run, and she estimated ½ hour for prep and a short cooking time. Her beurre blanc was in a thermos. Graham’s bread had been formed in loaves and was rising. Steuart’s Boeuf Bourguignon had been chilling since yesterday along with my crème brûlée, and our friends with the hors d’œuvres had yet to arrive. The rest of us watched as Gordon and Martha started into the dish that would be our fabulous entrée, or starter as they say in England, a first dish before the main plate. We passed judgment on every oyster as it was opened making sure it was glossy and wet looking and still smelling like the sea. Martha kneaded the pasta dough she’d made with a little more semolina flour then rolled it through the pasta maker making long wide strips. Pat and Dave arrived and I realized we hadn’t spent a second in the living room with the olives Steuart had beautifully arranged, so I brought them into the kitchen and we went onto a Henri Bouillot champagne. It was dry and airy and went great with these big, green olives. We had bought 10 or so at Whole Foods, and another dozen from our local deli Fisher Clark. Dave felt the deli olives came away from the pit more easily and we all decided they tasted fresher.

Martha assembled the oyster ravioli, per her recipe that had won her the London Times cookery competition for alternative Christmas dinners, then set them aside covered while the water boiled, and Pat and Dave assembled the small rolls of salmon with cream sauce and pumpernickel bread. salmon-rosettes.jpgSeveral bottles of Australian (Marlborough) Sauvignon Blanc went with the sit-down appetizer, that gracefully led into the next course. Martha poured the beurre blanc on the cooked ravioli and it held together in brilliant fashion. She felt she’d survived the final hurdle. And her creation looked beautiful with the chopped chives and Meyer lemon zest on the plate.

Steuart’s beef stew had never been better. He’d used a Beaujolais-Village, about a $9 bottle, to cook the beef and a cube of the precious stock he’d made when we first got our cow from Wyoming. The wine had been opened earlier, but it seemed to need a little more air so we decanted it. This was a bottle of wine we’d carried back from France in 2005. It was complex and a whole different animal from grape juice. The tannins were mellow and the dark fruit ghosts went with the beef. Graham thought there might be a bit of cork in the wine, and we feared it had suffered more than we knew from jet lag. I imagined the aroma more as earthy, and for me, the taste was deep and paralleled the very rich, day-old beef stew. If my description doesn’t make you believe it was wonderful, I’ll mention that the very noisy room went hush, and none of us noticed that Steuart had forgotten the shark’s tooth crouton he’d read about in Jacques & Julia, a cookbook of home cooking with Jacques Pepin and Julia Child. He had added the mushrooms at the last minute along with the smallest onions he could find. They had a hearty freshness that is different from the long-cooked onion or mushroom smell and taste that is so wonderful in sauces.

Graham’s 1/2 whole wheat / 1/2 white baguettes had come out of the oven minutes before and were a serious distraction.

The salad was another level of freshness, with orange sections and a Meyer lemon vinaigrette. Simple. Clean. Then the group opted for dessert before cheese. We used a pencil thin blow torch and melted the turbinado sugar that had been resting in a jar with a vanilla bean. The texture was sublime. The long cooking had paid off. Blue cheese with Pat’s wonderful fruit and nut loaf, a hard raw-milk Manchego and a soft French sheep and cow cheese were out as we drank the California sparkling wine at midnight.

Later, Pat showed me how to feign death, so that my guest would go home. When our kids were teenagers and they wanted to go out on New Years Eve, and we wanted to stay home and be available for them in case they needed us to … call them a cab, we started making a very special year end dinner for ourselves. One of us would make the first course and choose a wine to go with it, and the other would make the next, and back to the first one to make the third, and so on until the New Year.

We were going to do the same thing when 2006 was becoming 2007, but we had company and we decided to included them in these plans, then another group of friends from the mountains were stranded by snow that closed I-70, and they came to our house for New Year’s Eve. Each person made one of the great many small courses we had that night. It was so much fun, we missed the fireworks downtown at midnight. We’ve made this a traditional event on the last day of the year ever since.