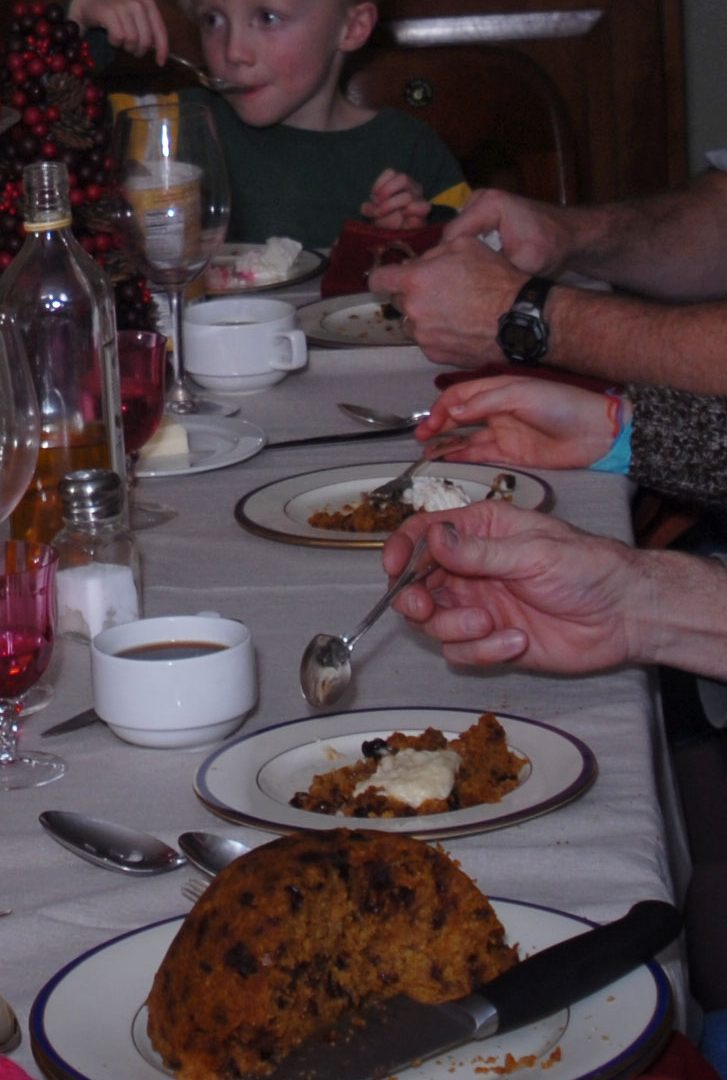 Every since I’ve been spending Christmas with my husband’s British family, the option for Christmas dinner dessert has been a Christmas pudding. Having grown up on Jello as pudding, I thought this spice bread in the shape of a bowl was a bit of a joke on the idea of pudding, and even more of a joke on the idea of dessert when I learned that many English people think the the word ‘pudding’ means dessert,  (When I learned to make a custard, I realized Jello Pudding was supposed to taste like a creamy custard but was so much worse than fresh.)

Christmas pudding tastes, to me, like a dense, moist, spice cake with a lot of raisins and other unidentifiable dried fruit. The best part is the whiskey butter that goes on top. Butter, thickened with powdered sugar and flavored with a dram of whiskey (Scotch whiskey in this family.)

So maybe I’m not the best person in the family to be making Christmas pudding, but it was supposed to sit for a least a week and more if possible, and I was the one who had the time available before Christmas.

On Christmas the pudding is inverted onto a plate, doused with whiskey, lit on fire and carred into the dining room. After its picture is taken, my pudding was cut and it turned out to be crumbly. Too dry. And not enough people found a coin in a slice — odds were diminished because few took seconds. I had placed several coins wrapped in wax paper inside the pudding, but I’d forgotten a key ingredient to keeping the pudding moist — grated carrot.

I used the Christmas Pudding recipe from Saveur Magazine, but made some compromises for what I had on hand. I didn’t have any Guiness, and had a lot more than 1/4 cup of Brandy left over from macerating the raisins, so I used that instead.

All the ingredients are mixed thoroughly, then pressed into a pudding bowl. The bowl is covered with waxed paper and a clean cloth or aluminum foil, then set in a big pan with water three quarters up the side of the bowl for four or five hours. Saveur suggested it be done in the oven, but set on the stove top works, too. Water should be replenished as it evaporates. Afterward the covering should be replaced, the pudding stored, and then boiled in the same fashion for an hour or so before it’s served.

This was not the traditional family recipe, and that called for grated apple as well, no Guinness, but not the minced dried bing cherries I used. Also the pinch of spices were supposed to be much bigger. I was supposed to taste the batter and add more until you could really taste them, said my mother-in-law.

My Christmas pudding actually tastes good. I just think it’s unfair to make it compete in the world of dessert — with competition with French stuff like Crème Brûle, Apple Pie or Tiramisu.