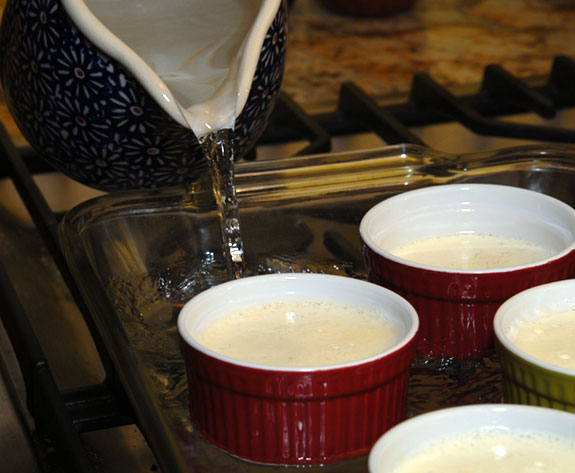 Dessert Made in advance for New Year’s Eve

I’ve liked custards ever since I learned to make them in 7th grade in mandatory Home Ec. There are very easy, especially if baked. I used a variation of Alton Brown’s recipe for the crème brûlée I choose to make for our communal New Year’s Eve dinner. Julia Child’s recipe is for a stirred custard. She cooks it on the stove top until set, and then chills it. In my modification of this recipe, I scalded the miilk/cream mixture with the vanilla bean. (I am trying to use what I have too much left over following the big Christmas holiday and cream is on that list).

While warm and pliable, I slit the vanilla bean and scraped out the insides with the end of my whisk and added all of it to the milk, then left it to cool for at least 15 minutes.

Meanwhile, I beat the egg yolks and gradually added the sugar. According to Julia and Harold McGee it isn’t really important that they are beaten until they form the ribbon, as Julia always says, or how gradually you add the sugar. The ribbon is fun to make and tells you that the sugar is dissolved and that the texture of the finished custard could be very fine (if all else goes well).

The crucial step is easy. Add a very small amount of the hot milk to the yolks while stirring them, so the yolks don’t scramble. We want a fine texture after all, not curds. Add the rest of the milk. Julia cooks this on the stove until it’s thick, and then strains it to remove any lumpy bits. Alton Brown puts the mixture into oven-going ramekins or one large casserole or soufflé dish, and bakes the custard at 325° F for about an hour until set.

The custards are properly baked when a knife inserted in the center comes out clean. The middle can still jiggle a bit. Mine, baked in Denver at 5280 feet above sea level, took an hour and ten minutes. To insure this custard is cooked slowly, as Harold McGee suggests in On Food and Cooking, the ramekins (or single large dish) should bake in a bain marie, which means that they are placed in another oven-proof vessel with about 1/2 to 1 inch of water. McGee says a thin steel vessel will loose heat more quickly than cast iron or glass and will not get to the required 185° F necessary to set the custard. A glass dish can only get to this temperature, but cast iron can go beyond it and make the texture less fine than possible. After an hour, I turned the custard up to 350° F, and watched it very carefully for the next ten minutes. It was as fine as I’ve ever tasted the texture. Chill the custard for at least an hour and up to four days. After I’d pulled the vanilla bean husk from the scaled milk at the beginning of this process, I laid it out to dry, then put it in a glass jar with ½ cup of turbinado sugar. When I was ready to serve the dessert, I put an even layer of this vanilla sugar over the top of each custard and browned it with a small torch until it was crusty and dark golden brown. This sugar, turbinado, makes a thicker crust than fine sugar; more like shaved ice than that stuff that makes a puddle.