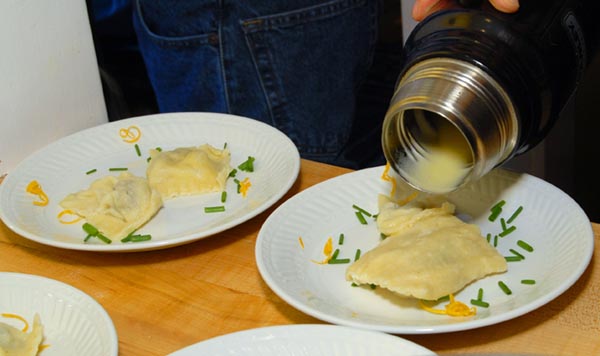 Who knew when I entered the first cookery competition (and lost it) that it would be the beginning of some kind of a new career?

In the Sunday Times in Scotland, an article appeared in the food section of the newspaper. It was about an upcoming competition at the the Turnberry Hotel, a 5 star resort on the west coast of Scotland, a renowned golf course and world class spa. It sounded nice to me!

So I sent in my application for the competition with an Alternative Christmas Dinner menu. I was selected to go to the hotel and prepare a 3-course meal in 3 hours. ( This was circa 1996, and before any reality TV) All preparations were to be done in the stadium-sized kitchen of the hotel. All went well on the day with the exception of cooking the chocolate mousse cake in a convection oven. I hadn’t had any experience with a convection oven, and even though I checked the cake half way through the cooking time, it had already been overcooked. So, I had to go back to the beginning and start that dish all over again.

The second time I entered the competition I made it to first place with an ambitious menu of: A classic. It still sounds good for a holiday menu after all these years.

This year, just before the holidays, while cooking Christmas cookies, Terry invited me to the New Year’s gala dinner at her place. I proposed to recreate a dish that I had made for this competition in Scotland some years ago (and I do believe that I won because of this dish.)

I knew it was a brilliant idea when I originally thought of it. Simplicity= an oyster, some lemon beurre blanc, a dab of butter and some fresh pasta to hold it altogether. I worked on my pasta making and practiced and practiced until I had it! it was perfection.

Google it up. You won’t find anything. I promise you this is as original as it gets.

Let me know if you try it,