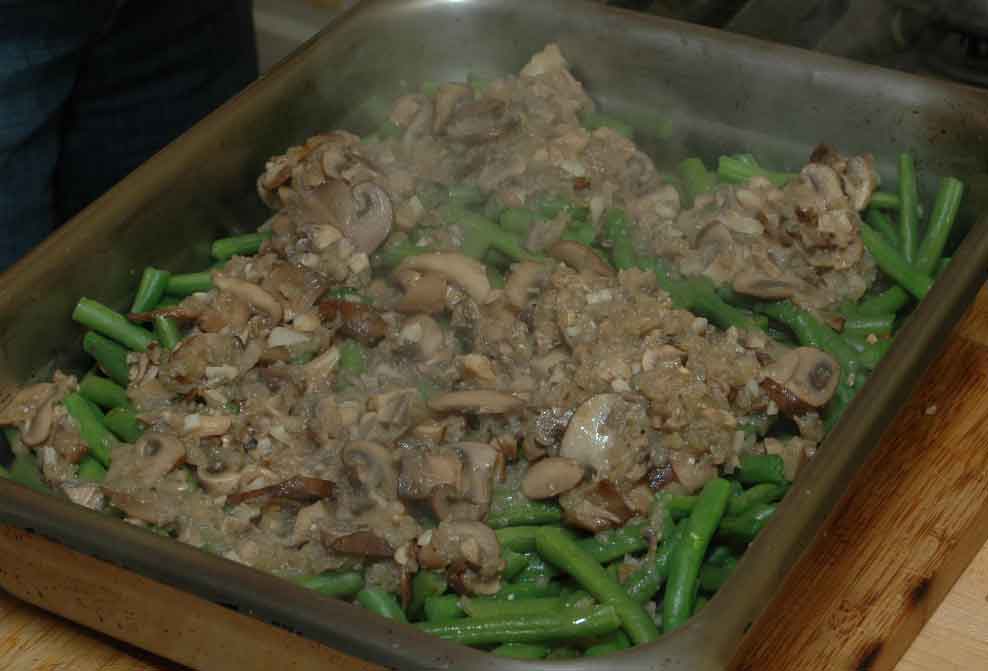 Vegan is best when cooking with vegetables. Trying to bake vegan is like barbecuing vegetarian.

I understand that vegan is a philosophy, like not eating meat on Friday, but I’m not a believer and make choices according to my food philosophy which is simple, fresh and efficient. For Thanksgiving dinner, I was assigned the quasi-traditional American green bean with mushroom sauce casserole, and I thought it was a great excuse for going vegan. Yes, I know it’s April, but this Thanksgiving dinner just happens to be in April because most of the attendees were deployed to Antarctica in November, but are now back home in Denver.

The only thing not vegan about the classic green bean with mushroom sauce casserole is the sauce. Usually the recipe calls for a can of cream of mushroom soup. That’s not simple, fresh or efficient (what amount of energy was required to cook all those chemicals and food particles, preserve them in the can and transport them around the country? How long has it been in that can?).

My usual approach is to make a mushroom cream sauce from fresh food. I sauté a little garlic, and mushrooms in olive oil until they start to release their liquid, then add a 1 T. of flour to make a smooth paste, add milk or cream and whisk into a smooth sauce with mushroom slices. A cream sauce is somehow less appealing in April than at Thanksgiving. So here’s a different approach that may be just as satisfying next November. For the vegan version of this sauce, sauté garlic and any kind of white mushrooms, then add grated eggplant. Let the vegetables cook in their own water until they fall apart. You can put this sauce through a sieve or food mill if you want it impeccably smooth but I just added the sauteed Crimini and left it with small pieces. The purpose is for this sauce to coat the beans and nuts – such a nice taste combination. So, just before I poured the sauce over the beans, I removed a bit of juice and added 1 T. of almond flour – adjusting to make a not-too-thin sauce. Preheat the oven to 350.
Heat the oil, saute the mushrooms and garlic until golden over medium heat. Add the eggplant and 2 cups water. Cook covered while you trim the beans. To complete the sauce, remove 1/4 cup of juice mix with flour (or almond flour) until smooth, add back to the sauce. Saute the more flavorful mushrooms and add to sauce. Brush olive oil in a casserole dish. Add the beans alternatively with most of the almonds. Pour the sauce on top, add the onions. Bake for 1/2 hour. Add the last of the almonds at the last minutes. This can be kept warm until the Thanksgiving dinner is ready to served.