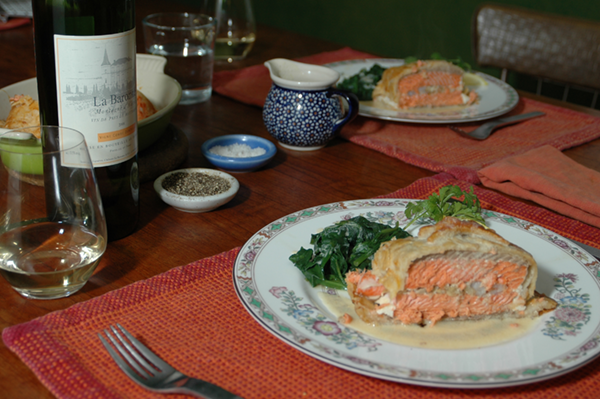 Saumon en Croute seemed like a big project to take on for our annual New Year’s Eve cook-athon. Before the event we practiced, worried that puff pastry was an impossible task for a home cook. Instead, choosing the correct type of salmon turned out to be what required advance knowledge.

The sockeye shown to the right, is dry, and so I sauteed the vegetables before assembling. When we made the dish with farm-raised Norwegian salmon, I chopped onion and mushrooms into slivers, but left them raw. This was a good call and the stuffing was great on both dishes. Timing, however, was more critical to the drier fish, and made the Norwegian a better choice for our big event.

At the Fine Cooking website, I found a great recipe for a quick puff pastry:

Cut the butter and flour together on a cutting board then add the water slowly and pull it together.

I rolled, folded, then put the pasty in the refrigerator for a couple hours. Just a half hour before putting the whole thing together, I rolled the pastry, again and folded it in thirds, rolled again, and fold in thirds, again. Returned it to the frig.

I preheated the oven to 450 F. I cut the onions and mushrooms as thin as I could, and took a look at the fillets before got ready to roll pastry. Straight from the frig, I divided the dough in half, then rolled 1/2 to a thickness between 1/4 to 1/8 inch. I wanted about 1-2 inches around the fillets. Here, I’ve assembled the dish in an enameled pan, Next time was on a cookie sheet and the bottom crust was crisper. First layer: pastry, then place one fillet in the center, lay on the vegetables, second fillet, then the top crust.

It is crucial to the moistness of the finished fish that the two layers of pastry are sealed, so I wet the exposed part of the bottom sheet and then folded it over the edge of the top sheet and pressed it firmly together, letting my finger prints make a ridged border. The last step is to brush the pasty with a beaten egg yolk.

As soon as I shut the oven door on the salmon, I turned the temperature down to 350 F and set the timer for 30 minutes. It was still hard to pierce when the buzzer went off, so I gave it another 15 minutes. Out of the oven, it sat covered with a clean cloth at the back of the stove until it was cut and served. Five or ten minutes less would have resulted in a slightly better texture, but the taste was great, nonetheless. Bearnaise Sauce: Served over potatoes that accompanied the Salmon, this sauce was make perfect because of the vinegar used.
A friend brought us, for Christmas, the best pickled string beans I’ve ever had. She said ‘save the pickling brine’ more than once.

Steuart boiled this brine with minced shallots and the fennel, sweet, shallotty, salty vinegar was all things to all tastes, but strong on its own. He slowly added this to 3 egg yolks with 3 Tbs. of butter. Voila. All flavors came together just like the sauce did, and was totally wonderfully Bearnaise.

Potatoes:
Slice potatoes like coins, drop in boiling water for 15 minutes, cool (you can leave in frig until you’re ready to cook). Layer then like a fan, or like fallen dominoes and top with grated Parmesan cheese. Bake for 15 minutes, add a few minutes of broiling if they aren’t your desired color of golden brown and serve. With Bernaise if you have it.

Our Saumon en Croute was inspired by the chef from Nova Catering. Richard made this for a big Christmas party in December, there were a few leftover pieces for me to try, and it was so delicious we decided to recreate it. We came close.