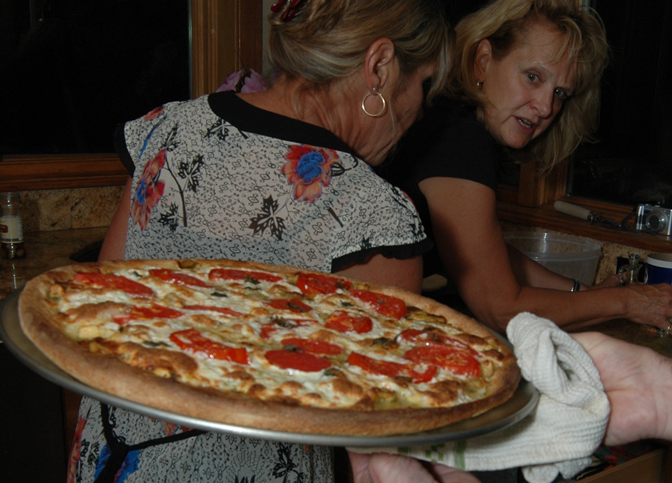 Each pizza came to life with a different mushroom.

All afternoon was set aside for a hike on a perfect in mid-July day. Not more than 15 minutes into the hike, a iron-brown stone turned out to be a mushroom of the very best kind — a King Bolete — and vistas were forgotten. We all zoom in … to the hunt. Our eyes scoured through the pine duff for the Edible.Boletus

“It’s like heroin, now you’re hooked,” said one of the foragers to the hunter who found the Bolete, which was about 8 inches across. No other boletus – one of the best of wild mushrooms in Colorado – was found on this trip. It was still early in the season. Yesterday’s hunt was the beginning of the boom. We found several boletus, many Sheep’s Foot (Albatrellis). This mushroom looks like a marshmallow that was toasted over a campfire and tossed to the ground. We found Chanterelles – the golden trumpet shaped mushroom that smells like fresh fruit, captured sunlight and sweet butter. And tastes just as good.

The Botele is the mushroom that Phyllis and I are examining, but we also found a few more unusual Colorado mushrooms. Clockwise, from top left in the above image:  the Hawks’ Wing, the Prince, a bit of the cap of a bolete, corral (looks like sea coral) and the Lactarius Deliciosus. Many more species of mushrooms had popped out today, displaying all kinds of colors and flare, but those were not picked, nor kept.

Ninety percent of the mushrooms I collect and eat are shown in these photos. The No. 1 rule of mushroom hunters: Pick only what you know you’d like to eat. When we go out with first-timer mushroom hunters, they will constantly asking ‘what’s this?’, ‘what’s this one?’ Often I don’t know the name, and don’t care because I know only a few wild mushrooms really taste good. And many cause nausea and worse things. The identity of choice mushrooms are passed around like the best small food blogs — from friend to friend.

The Albatrellus, or Sheep’s Foot, is a dense, meaty mushroom, tasting slightly peppery. Good ones smell a little sweet in the field, something soft like an apricot. Using the cleaned and chopped young Albatrellus (on the right in the above picture) Kari Canfield (on the left, above; center, in the second photo) sautéed the mushrooms in olive oil with a chopped sweet Vadalia onion and several minced cloves of garlic, added chopped prosciutto, and pine nuts, gave it a stir and put the mixture on the crust with chunks of fresh mozzarella cheese. While the mushrooms cooked we all discussed what to make with the next ingredient fresh summer squash from my garden in Denver, and Kari’s mom’s squash from California. Once all the ingredients were on the crust, we added some finely-grated Parmesan cheese to this pizza. With more of these ingredients left over we took another of the freshly stretched doughs we’d gotten from our favorite pizzeria in Breckenridge — Giampietros — laid it on the barbecue, flipped it pretty quick, and laid on the mushroom topping and the cheeses.

After about 20 minutes, the pizza was golden brown all over, and was voted by Rae, whose kitchen we had all invaded, as the best pizza of the night. “It just had so much ‘stuff’ on it,” she said.

The squash became their own pizza pies with the delicate Lactarius Deliciosus, or Milk Cap, a wild mushroom that bleeds white but is most delightful because of its smell of apricots.