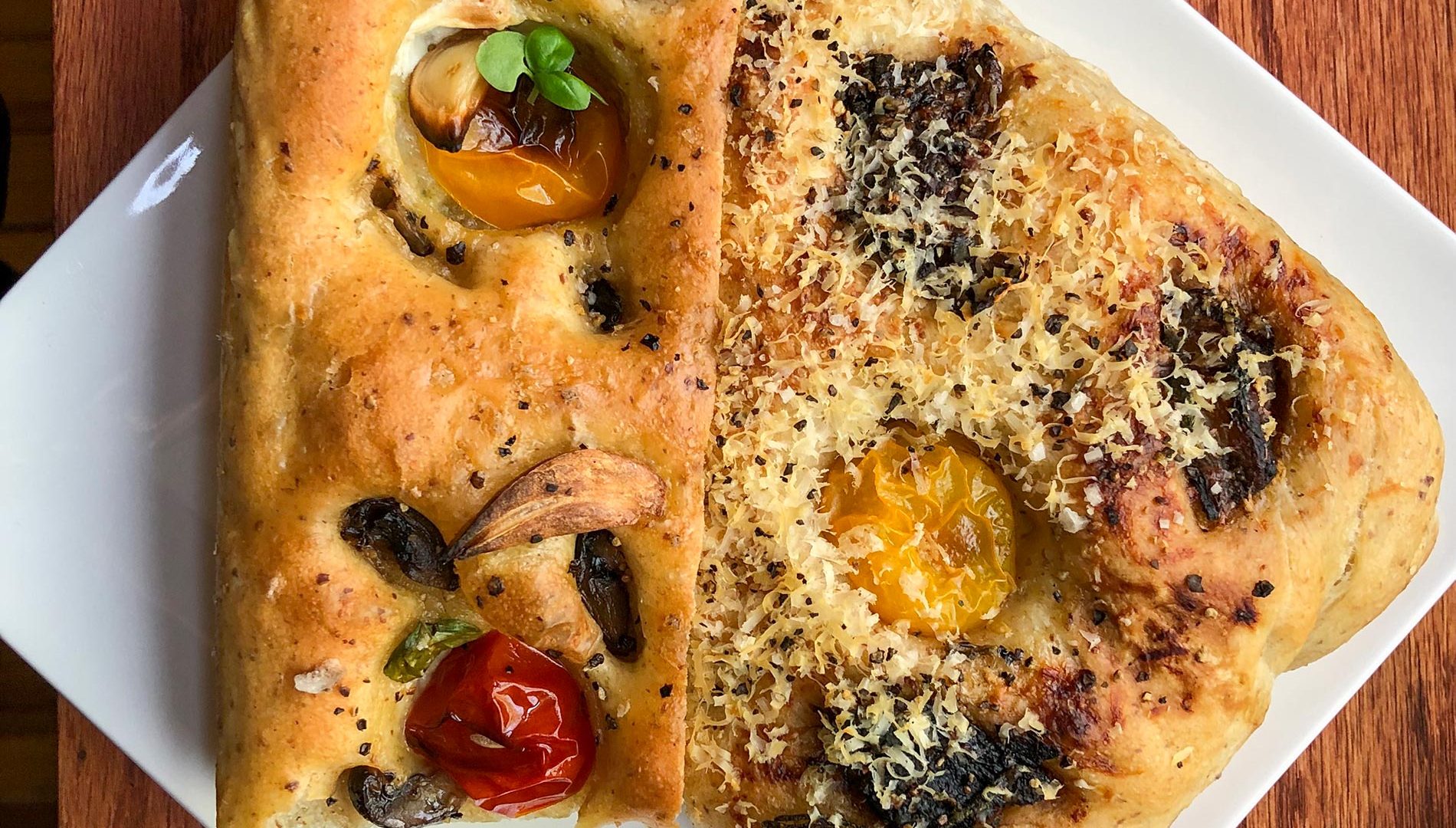 Steuart likes dough to prove overnight but was too busy last night watching the movie Contagion to make the dough. He started it a 8 this morning, instead. We have tens of pounds of white flour but not much whole wheat. The last of it went into the focaccia along with a little ground flax seed. These additions aren’t in the general (Paul Hollywood) recipe, but if you are able to imagine what something will taste like, substitute as you wish.

Both Keith and Andrew attempted a sourdough that they mixed up the night before and allowed to rise in the refrigerator. Duncan used regular yeast but made the dough the night before as well.  This morning Andrew brought his dough out of the fridge and placed it in his laundry room after the dryer had been running on high for a while. There on top of the dryer, with its door open, he let it rise, but by the baking Skype he wasn’t happy with its rise. An hour earlier, he made a quick dough as Steuart had done this morning.  Andrew left the sourdough to continue rising, and it was still doing that as we said goodbye after all the focaccias were out of the oven. He sent photos later and was a beautiful thing.

Keith guessed the water content was 80% of the flour was around 80%, which is what the recipe below calls out. Duncan’s was more like 75%, and Andrew’s 70%. Steuart felt the dough was far too wet and added the extra wheat flour and flax bringing the ratio somewhere between 70 to 75%.

Keith’s dough which we are guessing was the wettest one, had the largest holes. Steuart’s second batch had larger holes in the crumb, and it rose for the second time for about 40 to 50 minutes – about twice that of his first one. He wanted the dough to rise up around the toppings and make the nice depressions that are typically of focaccia.

Steuart’s had the most yeast – 14g – but it didn’t do what he hoped and create more bubbles. In his finished bread, there were no more than Andrew’s recipe that called for only about 4g.

Our oven, a Bosch,  is a true convection one and the focaccia was baked at 450°F with convect and so read 425°F. After 20 minutes the interior of the bread was more than 190 °F – which according to the others it meant it was done. Steuart was concerned that it wasn’t fully baked, and our mistake was cutting it too soon and not allowing the focaccia to rest, which would have allowed a little more out of the oven baking. But it tasted great. A sourdough by Keith Everyone held up their breads.  You can see the various crumb structure. Keith’s screen froze, and yeah, this is somewhat of a hassle. We would not be able to bake together at all without this somewhat faulty technology because we live in different states and cities. If it hadn’t been for the Coronavirus, we might not have thought to do this brother bonding experience and we hadn’t all been exposed to virtual meetings due to the Shelter at Home order. Top and return to proving area Recipe for the dough:

Prove the yeast in the water with a pinch of sugar.  Add salt, olive oil to flour and gradually add the water and yeast to the dry ingredients with a hand dough hook.

Oil the work surface and knead for 10 minutes. Set in a warm place to rise until doubled — about one hour. The dough is very moist, and Keith suggested it might be good to let it rest after kneading it in the bowl for a few minutes. After resting for about 10 minutes, knead it on the oil work surface. Keith suggested that this kneading could be done several times over the next two hours. And Andrew’s recipe, from KC on YouTube called for a folding method.

Where to leave the bread to rise:

You can use the proofing drawer on your oven, but we’ve found ours to be too hot. Use your laundry room or if in sunny Colorado, use a window sill where the sun is landing. Cover with a damp cloth in our dry climate.

When double in size, the dough can be formed in a pan – of the shape you want for the final form. We used two methods to ensure the focaccia would come easily from the pan, and both parchment paper and a few teaspoons of oil in the pan worked. The dough that was added to an olive oiled pan had a crustier exterior. Preferred this, but I wouldn’t if the olive oil wasn’t great. Mushrooms were tossed in this oil before being poked into the dough on what would be the four corners of a slice. Fresh mozzarella  cheese was placed in the center of the mushrooms and covered with fresh micro basil and a half cherry tomato cut side down.  The second dough had barbecue-seared eggplant marinated in balsamic vinegar, more tomatoes covering a little dollop of pesto, and a topping Parmesan cheese, salt and black pepper.

After toppings are added the dough must have time to rise again.

Bake at 450 for at least 20 minutes or until the internal temperature is above 190. Let rest before cutting. While warm feel free to put more good olive oil on top.