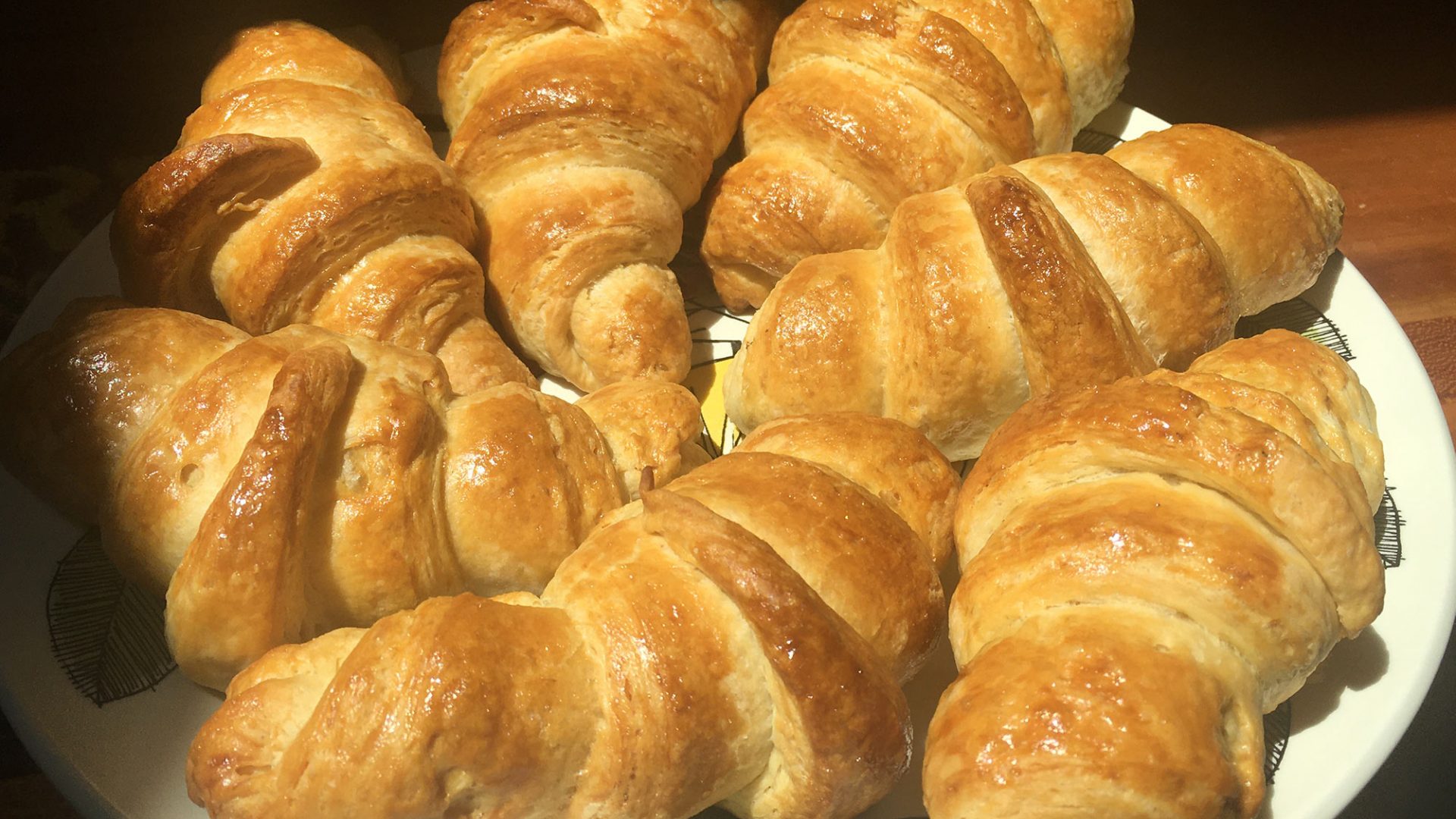 Sunday, May 3, 2020 – via Skype, Steuart and his brothers will each bake a French dozen of the classic croissant.

May 1 – Steuart made the dough, the butter rectangle for layering and left to chill overnight in the fridge.

May 2 – He rolled out the dough, folding it, chilling and rolling again at 90 degrees to first pattern at least six times.

May 3 – at 8 a.m. we’re outside on our marble patio table rolling out a 1 meter length of dough. Figured out how cut it into 14 triangles and rolled them in the croissant shape. Realized we forgot to roll the triangles a little thinner before rolling, so make that correction. Around 9 a.m. they were set aside to prove for what we expected to be at least 2 hours in a cool (75°F max) location under cover on our dining room table. At 11 a.m. – we tested the dough by baking the end pieces that we had rolled with chocolate. Baked seven at a time at 385°F – for a long 25 minutes, with the second batch in on the top midway through.  Opening the first ones too soon, we found that letting them rest a few minutes. Top right is Andrew’s croissant from Sally’s Baking Addiction.   The others are clockwise: Graham is kneading dough, Steuart’s brother Duncan made a quick recipe and incorporated the butter in the dough and then did the rolling and folding routine.   Steuart’s is in the foreground, and Keith’s – started on Thursday with some sourdough added – was badly lighted. We were very concerned that we had proper lamination of the butter. In the next image -the side view – you can see more of it.

Recipe from Fine Cooking by Jeffrey Hamelman, in parenthesis is the recipe by Paul Hollywood. Ingredients for the croissant dough Mix the dough in the evening, bring together and knead for a short time and then form into a flat shape not a ball. Put the butter on parchment or waxed paper and press together in a rectangle. Cover with paper and roll it so that is forms a smooth shape and is about 12 cm x 25 cm.  Leave to chill overnight in fridge. Remove dough from fridge and roll to  about 36cm x 24cm. The dough should extend about half the size of the butter rectangle on both sides and be about 1/4 of the length on top and bottom.  Fold the butter up like you were wrapping a package, so you don’t overlap much dough and the seam is easy to seal. If the butter is still a good temperature you can roll it out to double the length and then fold like a business letter in thirds and put in the fridge to chill. Using rectangle shape, you will naturally roll this out next perpendicular to your first roll, make the letter fold again and put it back in rectangular pan and back in the fridge. When you take it out again you will be rolling it out at 90 degrees to the way you first rolled it.  You want to repeat the rolling and folding until the dough is very supple and the butter doesn’t have any noticeable thickness – you never want the dough to get warm enough that the butter melts and incorporates into the dough. The recipe called for three turns, and Steuart did this six times and he thinks the dough was improved by the extra turns.  When you have that feeling Steuart had after the sixth turn, leave the dough to chill in the fridge overnight.

Remove dough from fridge and place on a cool work surface.  Use a very little flour on the surface if it sticks. Roll out lengthwise until the dough is 100cm x 20cm. If the ends are uneven, roll until you have the full 20cm width for 100cm.

Very gently, roll out this 20cm triangle to 25cm. Notch the short edge of the triangle and pull the corners out slightly as you roll up the croissant, hoping that you have 4 distinct levels in your croissant. Shape as you like pressing out the points and then brush with a thin egg wash and leave to prove at 74 degrees F.