I wanted to make a chocolate cake for my birthday, today, and for the National Bundt Day, November 15, but this one was too airy to hold together and come out of the angular pan in one piece. Shards of cake show the pumpkin custard – one lonely flan left over from a batch made last week –  that was intended to make it more moist than a standard cake. My intention was not to decorate the exterior so if it had come out of the pan like I’d wanted, the pumpkin interior would have not be apparent when cake was presented as a whole. Well, happy surprise, it was a jumble instead. 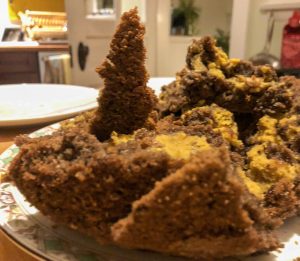 Pan preparation: coconut oil, dusted with almond flour before filling with batter. Pumpkin custard did not touch the pan but was placed inside the first layer of chocolate batter and topped with the second half. Pan was cooled for five minute then inverted for 15. No movement. A knife was slipped along available edges but to no avail. The cake would not release from the pan until torn from it in remarkably even pieces and no way to reassemble.

The cake was a basic chocolate cake with dry cocoa as the flavoring.