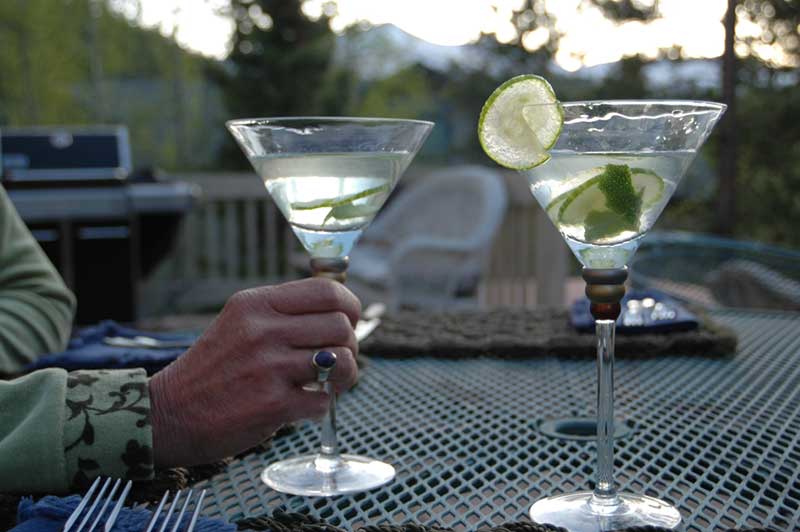 Heaven in a smell – vodka in the glass.

By mid May our tarragon was two feet tall and so thick it feels like we planted a magic tarragon stalk three summers ago. Sure, it’s great with fish, great in a chicken soup, and I even use a few sprigs in a vase of flowers, but there’s so much and it’s so tender it’s almost sweet this time of year. Dried tarragon is such a bitter relative and what we could harvest now and eat fresh.

I topped about four stalks, washed them, twisted them in my hands to release their flavor and put them in a big bowl and covered them with vodka I’d kept in the freezer. We used both Idol, a French vodka made from grapes, and a local Colorado vodka called Goat, made from grains and sweet Corn from Olathe, Colorado. For our first attempt we only let the tarragon sit in the vodka for about 20 minutes, poured it over ice and a big twist of lime. The martini experience was one big whiff of tarragon and the taste of the delicate Idol vodka with a hint of lime and the faint licorice note of the tarragon.

For the second attempt, the tarragon sat in the vodka for about two hours. Ice was added just before serving, stirred and poured into cold glasses with a twist and slice of cucumber. For some non-tarragon lovers the flavor was too strong, so we cut it down to a nice balance with a heavy squeeze of lime.