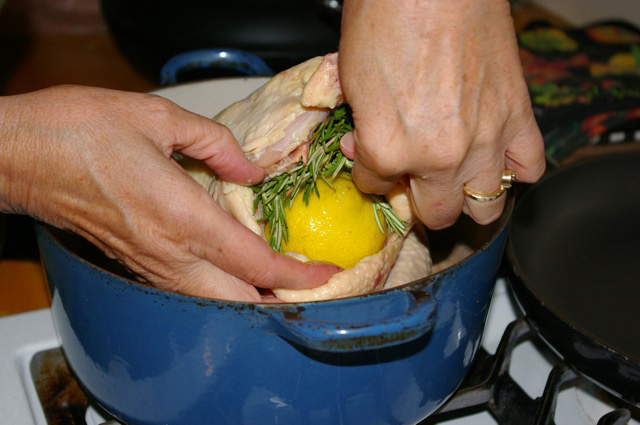 Start with the Best Chicken

Chicken exists outside of plastic wrap

It appeared at the Santa Fe Farmers Market. From Socorro, New Mexico with Tom from Pollo Real, the first certified organic poultry farm in the United States. It was a French Red Label chicken, and I’ve never had a chicken so good. Yeah, sure, I’ve had the free-range chicken from Whole Foods and yes, it’s much better than anything else in the big grocers that calls itself chicken, and it’s pictured above. We can’t get a local chicken in Denver.

In June we bought our first Pollo Real chicken, roasted it, made stock, chicken enchiladas and an amazing chicken salad. Imagine how good this chicken is roasted, as I remember how great it was cold. Like breathing fresh mountain air with all the warm memories of the best Christmas meal. I spent more than $20 on that chicken, but made at least 5 meals from it and at the very next opportunity I had, I bought a second chicken. And we roasted it with friends. It’s a simple way to have an extraordinary dinner party.

Start the oven at 425 degrees F. Remove the gizzard and neck from the interior of the chicken, wash it, inside and out, dry it and stuff with herbs. Cut a lemon in half and rub over the bird, and put it in the cavity of the bird that you’ve put in a heavy casserole like a Le Creuset. Add a cup of white wine to the casserole and roast breast up, covered. Turn the oven down to 375 after 15 minutes.k (If the chicken has been frozen on just recently out of the frige, you might need to turn the temp up again at the end of the roasting).In less than 1/2 hour the chicken breast should be done — having reached a mere 150-155 degrees. Use an instant read thermometer, or better yet, one that calls you when it gets to temperature.

I cut the chicken at this point. Find the natural division between the leg and the body, the wing and the body and cut with a study knife. Just rock the knife firmly in that spot until the pieces separate. Then, you’ll find an equally natural place to cut the breast from the back, left and right. The top near the wing is the toughest spot, but just press the knife, rocking until it separates. Put all the parts except the breast back in the oven for another 10 ten minutes or until the leg reaches 165 degrees.

This give you time to cut the chicken breast in pieces, two, or like you would for a turkey if there are several guests. And you’ll have time to make a sauce with what juice was on the cutting board and left in the roasting pan. Thicken those juices by making a roux of flour and butter, or adding one egg yolk, on low heat, or if very hot — cornstarch. Cooking makes the thing hold together and not taste like flour or egg.

Then you can remove the leg from oven. Cut it in serving pieces, if you want, and add more of the cooking juices to make the quantity of sauce you’d like.

Remove the pieces you’ve cut and aren’t serving, put gizzards and skin you may have removed back into the casserole and turn the oven down to 250. Let cook several hours, and strain. You’ve now got a wonderful chicken stock (soups, sauces, risotto) and perfectly cooked chicken for another meal or two.