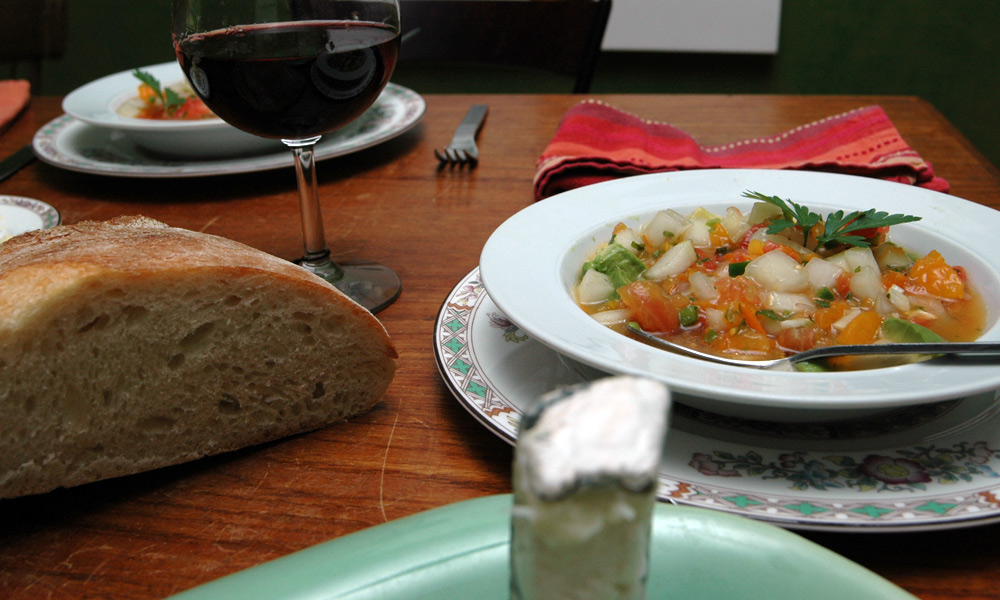 Hot days. So many tomatoes.

I picked the first few plum tomatoes. We have nine (4 SanMarzano Redorta; 5 Opalka) plants in all and we hope they will make enough paste to last us all year. We’ve never grown the Redorta, and the Opalka were grown from seeds I saved from last year, so I wanted to try them before I bothered to store the lot. This first batch of plums, I made into gazpacho.

Sunday afternoon gazpacho for after the U.S. Pro Cycling finale in Denver August 28 – a perfect excuse.

We’d had a few Sierra Nevada beers up at the race finish, but were all pretty hungry after riding around to find the best race viewing positions. The food at the event looked good, but there wasn’t that much shade, and besides I had the gazpacho made. Here’s what I did on the day before: dropped six tomatoes in boiling water. Turned the heat off below them, and pulled them out one at a time. Removed the skin, which I put in a stainer over a bowl. Then, I opened the tomatoes and scooped out the seeds, which I also put in the stainer. I cut the meat into bite-sized pieces and put them in a bowls with a chopped green (somewhat spicy) pepper, a garden-fresh cucumber diced, a red onion, a few tablespoons of basil, 3 small minced garlic. The tomatoes were making a juice while all the other chopping was going on, and I went out to the garden to see if there was something else. Found a Chinese cucumber that is a cross between a zucchini and a cucumber. (This vegetable must be peeled because it has a fussy skin of little hairs all over it’s exterior. My friend Sandy brought these seeds back from Chinatown last winter.  We grew them not knowing what they would turn out to be.)

To all the chopped vegetables I added about ¼ cup of olive oil, 1 cup water, 2 Tbs of dry white vermouth and the water that the tomato seed and peel made.  Just before I served it I added about a dozen ice cubes and let the gazpacho sit out at room temperature.

Martha was assigned the wine for this afternoon, after-race meal, and found that gazpacho is the wine pairer’s nightmare. She brought a couple of Spanish reds (a Rioja and its cousin, a Tempranillo) and they were perfect.

We started with some previously marinated eggplant (with parsley/garlic/red pepper) and some green bean marinated in rice wine vinegar.

We bought a pizza crust from a local pizzeria, Abo’s, on the ride home. Stretched it into several pieces and grilled them. First on one side, then flipping them, and adding some chopped garlic, basil and rosemary from the yard. Then we grilled some eggplant rounds. When they were marked well on both sides we piled on cheese and a tomato slice. These were the garnish in the gazpacho that we served with the grilled pizza crust. Enough for six people. There were six of us and we had to share two pieces of leftover piece of semifreddo. It was cold and very frozen, and felt great on this hot afternoon.