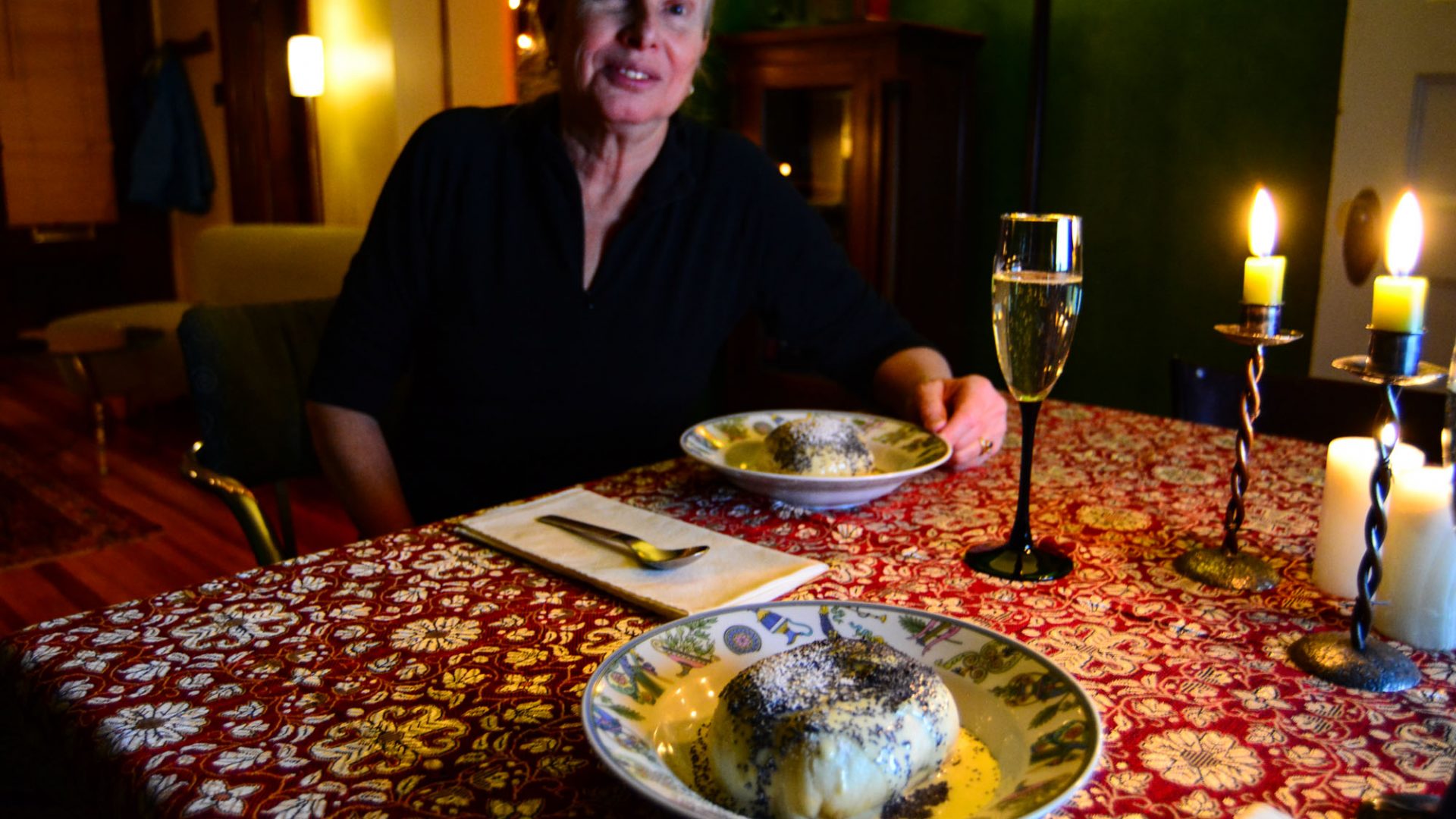 Friends spending the holidays in Vienna sent photos of a germknödel – a stuffed dumpling dessert that my friend, Pat, has promised to make for me for years.  She was earnest, I’m sure, in this promise because I have all the weird stuff that was in her pantry when she moved to Europe this fall and there are poppy seeds and the closest thing we can get to Powidl in this country – plum preserves.

In the photos sent, Pat’s dumpling is covered with a butter sauce. I’m using a creme anglaise – same as from yesterday’s Ile Flottante. The following is a recipe from The Bread She Bakes website modified for my altitude. For the steamed yeast dumplings: Let’s Make the Dumpling for Germknödel

Warm the milk gently in a saucepan with the vanilla bean, add the butter. Turn off heat before melted as you weigh out the dry ingredients into one large bowl, the bowl you’d normally use for breadmaking.

Remove the bean to a cutting board and scrape out the insides and add to the milk, which should be no more than 100 degrees (you could put it on your wrist and not feel burned, like you’d do for a baby because that’s what the yeast wants).

Stir this into the dry ingredients, mix and add the eggs. These should be room temperature, but if too cold add a small amount of milk to them and stir constantly. Add more to mix but not cook the eggs. At the mile-high altitude of Denver where it is also dry – especially in winter – I have about 1/2 cup of warm water nearby as I mix the dough. It should come together but not be sticky. If you can’t bring it all together in a loose way you need to add water, slowly. Then knead for 10 minutes or so until it is smooth and a fingertip poked into it will spring back.  Then prove for 1.5 to 2 hours.

Punch down, pull into a snake and cut into 10 pieces. Flatten each piece add a bit of the Powidl/Jam mixed with alcohol. Bring the dough up around the jam and seal, then form into a ball. Place the dumpling onto a baking sheet, cover with a dish towel and leave to prove for about 30 minutes to 1 hour. The dumpling should be visible risen before you take it to the next step. While it does this second prove, make the sauce if you haven’t already because you’ll want to eat the dumplings as soon as they are steamed.

At this point, I froze the dumplings that I didn’t want to cook and eat tonight  (I will report that they turned out just as good later). team the dumplings: bring about 1 inch of water to your steamer’s bottom section, have baking paper on the steamer section and arrange the dumplings (as many as you can fit) onto the paper, cover and steam for 15 minutes. The dumplings are best eaten right away.  Pour the warm creme anglais (a thin custardy vanilla sauce) over the steamed dumpling and sprinkle their puffy round tops with a mix of ground poppy seeds and icing sugar.