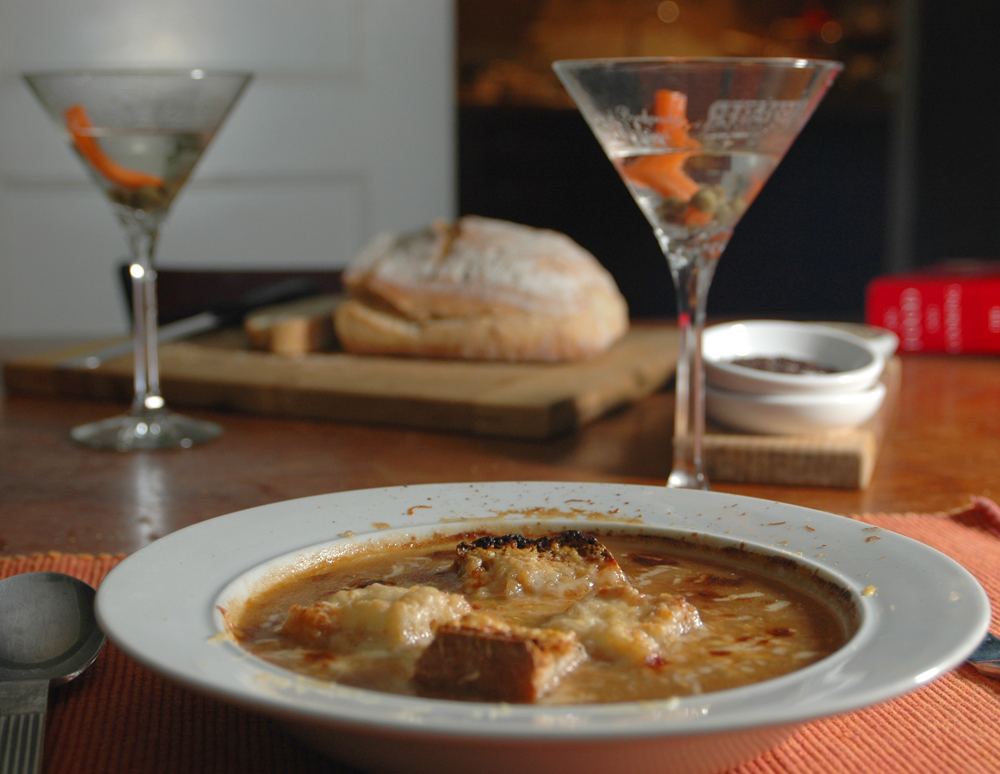 It’s a weekend and my husband is working on a project elsewhere, so I can take some time to make a few things for the workweek. One is French Onion Soup, which is better if left to meld in the frig for a day or two. Cook 5 cups of sliced (long thin wedges) onion in 2 Tbs butter and 2 Tbs olive oil in a covered saucepan on low heat for 15 minutes. Uncover, raise heat to medium stir in 1 tsp. salt and 1/8 tsp. sugar and cook for 30-40 minutes stirring frequently until onions have turned an even deep golden brown.  (If you’re making another dish for the week. You can prepare it here, while you’re giving the onions the occasional stir.

When the onions are brown, sprinkle on 3 Tbs flour and stir for a few minutes.

Off heat, pour in 2 quarts of boiling brown stock (if you want a lighter tasting soup you may use a lighter stock like chicken or vegetable stock, bu t a beefy one is what is traditional). Add 1/2 cup dry white wine or dry white vermouth. Simmer partially covered for 30-40 minutes or more. then set aside until ready to serve.

It will taste better the next day.

You’ve arrived home from work on a crisp evening, and you put the soup pot on low to warm. And turn on the oven. (Another reason this meal satisfies in March or those last persistent wintry, not quite spring nights.)

Cut a couple slices of french bread per person, bake the slices in the oven for about 1/2 hour while you’re reheating the soup. Brush with olive oil and turn half way through the cooking if you want, and just a minute or so before mealtime, grate Parmesan cheese on top and toast under a broiler until deep golden brown. Place the cheese toasts on top of the soup as you serve it.

You can also make biggish croutons by cutting bread in 1 inch cubes and baking them until they dry out, brushing these with olive oil, rubbing with  a crushed garlic if you like garlic. Put these cubes on top of the soup in the bowl, or a soup tureen if you serve soup en mass. Grate cheese on top and then toast under the broiler for a few minutes until golden brown. Use hot pads to serve the soup bowls and set each on a place mat because it will be hot.